Le Roc, Southwold : A French Café, Flying the Flag For The Languedoc 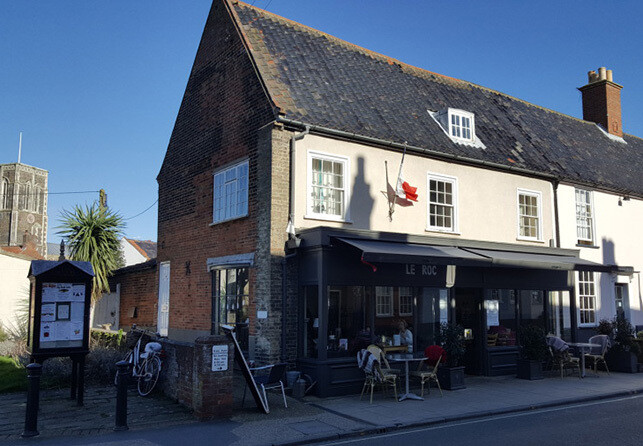 We all know the British tendency to gather eclectic wine and food from around the world, often to a fault. Fajitas share menu space with lamb shanks and balti, and every wine producing country in the world is represented on the list. Argentine Malbec rubs shoulders with Chilean Merlot on a list that could be from Wetherspoons or the best local restaurant. Nothing wrong with that, but it’s very safe.

If you come out of Southwold Post Office feeling hungry or thirsty, "Le Roc" beckons you in from the other side of the road.

You instantly step in to the best sort of rural French café, owned and run by the unmistakeably Gallic Gérard and the less Gallic Jane. There is a mural of a Mediterranean "corniche", a display of Pastis memorabilia and a pile of boules. Gérard was a mean "tireur" in his youth- the player who chucks the boule with great speed to knock inconveniently placed opponents from the “terrain”. The fountain from his home village of Missegre near Limoux is the symbol of the restaurant, and adorns the front of the menus.

A year ago “Le Roc” had no licence and food was not served in the evening. It is now open on Friday and Saturday nights for North African influenced small plates and some French specialities as well. At lunch time, croque monsieur, omelettes and simple specials predominate.

Owners Gérard and Jane have now put together a short, focused wine list which is not only French, but also exclusively from the Languedoc. It is a rare opportunity for some great wines to get the attention that they deserve without the clutter of "easy choice regions" or "bar call grape varieties". Any advice could not be more local and knowledgeable. Gratifyingly, “Le Roc” is one of the few places I know whose wine list is regularly commended on Tripadvisor, that most pernickety of forums.

So - what to drink to make your Languedoc lunch or evening? With Gérard and Jane's food recommendations:

Les Forts de Borie Azeau is in the cooler North of the region and has made a forceful yet refreshing white wine for food. It is also very rare - less than 2% of production is white.  This wine was discovered by Ben, “Mr Wheeler” buyer in a restaurant in France- Jerôme Borie Azeau’s red and white are now mainstays of our range.

With any sparkling wine it is difficult to avoid a comparison with champagne, a comparison that Limoux producers quietly resent. They assert, with justification, that their product too deserves its own footprint of exclusivity, and that they were making fizz before anyone else in the world. Great fizz from the south, made from Chardonnay and the local Mauzac grape using the Champagne method. When you are in “Le Sud”, who needs Champagne? The lower acidity of Blanquette makes it great with light meals and starters, such as:

And two contrasting reds, ironically made by the same people:

Eight years old! This Rhône-like syrah blend is absolutely bursting with flavour. Big, bold and expressive with lots of ripe, seductive plum and blackberry fruit. Made from 20 year old syrah vines, with a dash of grenache and mourvèdre adding warmth and texture. 15 months in barrel adds notes of Mediterranean herbs and spice, cracked-black pepper and an appealing liquorice character. Many layers of flavour here, with luscious black fruits dovetailing with roasted coffee, dark chocolate, and a gently smoky, savoury character. Our biggest selling wine in 2016.

Top, top Languedoc wine from “La Laviniere”, a newly defined area at the foot of the Montagne Noir. Balanced yet complex, forward yet with potential to age. I can find no better tasting note than Gérard’s own- “lovely jubbly”.

We are going to see more and more of top wines from “Le Sud” such as Mas Belles Eaux and Domaine Tholomies- try them early and impress your friends!

By the way- the croissants and coffee are top notch too.

You can email them at [email protected]