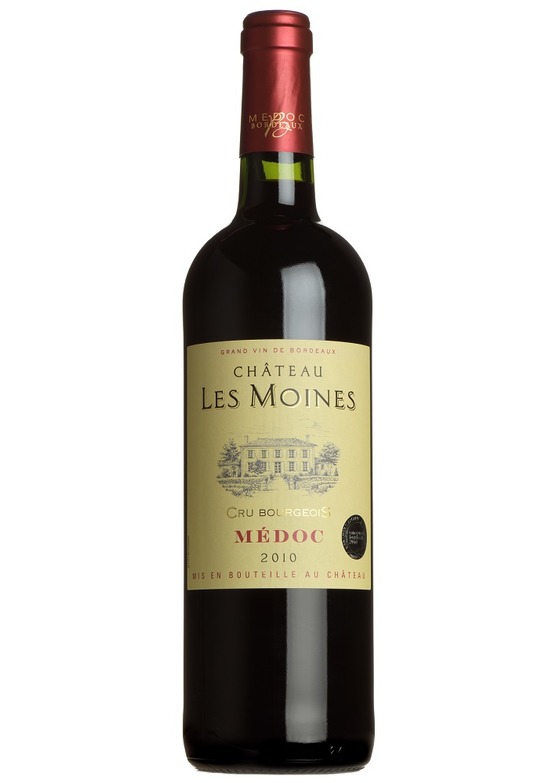 "I have tasted enough wines from 2005, 2009 and 2010 to realize that these may be the three greatest Bordeaux vintages I have tasted in my career." Robert Parker, Wine Advocate

A delicious, mature claret from the Cru Bourgeois Château Les Moines that offers exceptional value. Garnet in colour, with complex developed nose of mushrooms, cured meat and cedar spices, with a solid base of red plums and sour cherry. Wood spiced black cherry and blackberry juice on the palate, with a tone of pure tea bitterness. Cocoa powder-like tannins form a decent structure, refreshed by great elegance and followed by a lingering berry juice finish. It is at its prime time now and is perfect with fatty red meat. Drink: 2020-2024. 92 pts., decanter.com

A shining example of just how fabulous red Bordeaux can be at this price point.

Established on one of the Médocs best limestone-based plateaux, the châteaus 34 hectares of cabernet sauvignon and merlot are amidst supreme terroir, imbuing fruit with an enticing balance of power, roundness and concentration for cuvées of exceptional depth of flavour. Where, in the 2010 vintage, Château Les Moines realises its full potential.

Of course, such great years cannot last forever; nor does the festive season. Buy a case of 2010 Château Les Moines to enjoy the best of both this Christmas.

Grape: /Merlot/Cabernet Sauvignon
Region: /Bordeaux
Country: /France
ABV: /14%
Drink: /Now-2027
Unit: /Bottle (75cl)
Found this gem at a coop store and wanted more but they had sold out but found it at Mr Wheeler wine. We very much appreciate medoc wine and this is a top class cru bourgeois with a super 2010 pedigree. I guess we must be on our 4 th case now but whos counting!
Ken - August 2022