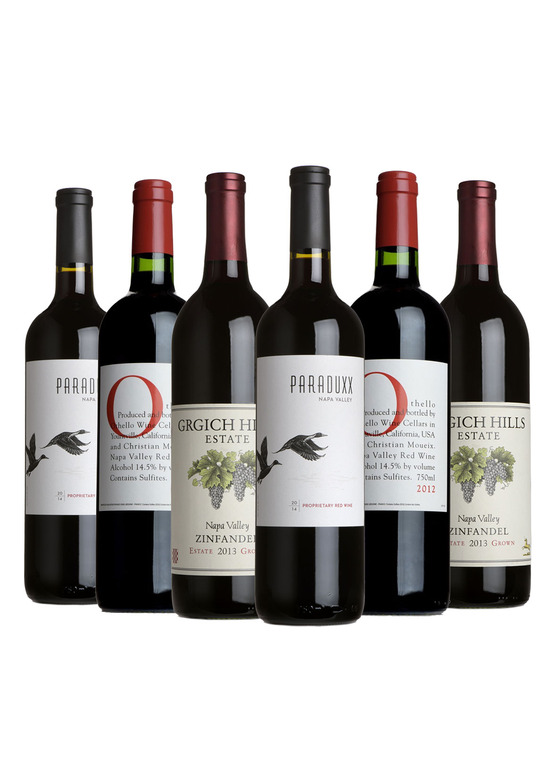 The wines of California have undoubtedly made significant inroads into the UK market over the last several years and continue to do so as increasingly drinkers and collectors recognise the outstanding artistry and finesse the Golden State has to offer.

Mr.Wheeler, long supporters of the greatness of West Coast provenance, has now hand-picked three parcels of mature vintages from celebrated producers Duckhorn Vineyards, JP Mouiex and Grgich Hills Estate and is delighted to offer you this mixed case for your immediate drinking enjoyment.

This mixed case includes two bottles each of the following wines;

2013 Zinfandel, Grgich Hills Estate, Napa Valley
Mike Ggrich is a long-standing Napa Valley original. Having had a hand in Montelenas triumphant chardonnay in the Judgement of Paris of 1976 makes him one, and for the last 45 years, hes been making some of the states greatest wines.

As no Californian offer would be one without zinfandel, weve made it more so with Grgichs 2013. Eight years on and its in a sweet spot: strawberry on the nose turns to spicy clove and pepper, with a palate layered in boysenberry and blood orange. With elegant tannins and mouth-watering acidity, its another triumph.

2015 Othello, JP Moueix, Napa Valley
The greatness of Californian provenance was also recognised by one of Saint-Émilion and Pomerols most renowned families, famille Moueix. In 1983, Christian Moueix established the now world-famous Dominus Estate in the historic Napanook vineyard near Yountville, Napa Valley. Since then, their reputation for producing among the Golden States most prestigious wines has been well secured.

Othello hails from this same Napanook vineyard. A classic left-bank 'Bordeaux blend' with cabernet sauvignon very much to the fore. Very stylish and sophisticated, with classic Napa richness and texture. Warm, intense blackcurrant fruit - heady, spicy, and almost hedonistic. Bold and weighty on the palate, but also with a luxuriously smooth texture - ripe plum and cassis flavours with a notable polish and a touch of exotic spice.

2014 Paraduxx, Duckhorn, Napa Valley
Its easy to spend well over £50 on a bottle from renowned producers in Napa Valley, which is what makes the 2014 Paraduxx cuvée from Duckhorn Vineyards such exceptional value. Established in 1976, it became one of the first 40 estates to be established in Napa Valley; indeed, becoming the first estate in this now famed corner of the wine world to release a luxury single varietal merlot.

Paraduxx was created to allow the Duckhorn Vineyards' winemakers the freedom to explore other styles without detracting from the winery's focus on Bordeaux varietals. In 1994, Paraduxx sourced 4 tons of Zinfandel from the 100-year-old vines of Napa's Korte Vineyard and blended it with Duckhorn Vineyards' own estate cabernet sauvignon, along with smaller amounts of merlot and petite sirah, creating the first Paraduxx vintage. The brilliantly labelled and smile-inducing Paraduxx is rich, deep and satisfying.