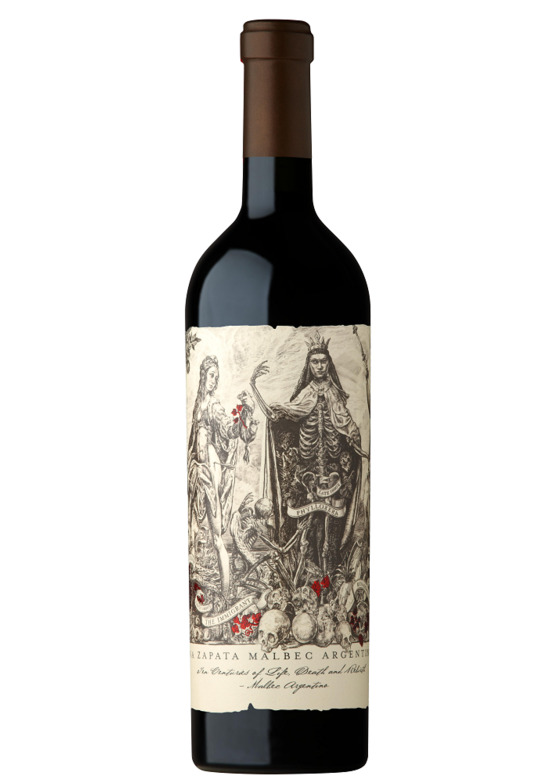 The epic tale of the noble Malbec grape is like no other, and the label for Catena Zapata Malbec Argentino pays tribute to the varietys history in France and its rise in Argentina. Four female figures embody different landmarks in the history of the grape. Eleanor of Aquitaine represents the birth of Malbec. She is a strong, Old World presence, lingering at the bridge in Cahors, where Malbec came into its own. Next, the Immigrant symbolizes the movement to the New World and the unknown explorers and adventurers who connected Europe with the Americas. Phylloxera personifies the death of Malbec in the Old World, which enabled its rebirth in the new. Finally, there is Bodega Catena Zapata, represented by Adrianna Catena, who depicts birth, earth, and motherhood, sharing the riches of the New World. No matter what the vintage, this wine is really more than 100 years old. It represents a family's journey to produce an Argentine Malbec that can stand with the great wines of the world.

Critic's Review:
"I had two very good vintages to compare of the Malbec Argentino, of which the 2018 Catena Zapata Malbec Argentino feels a tad riper than the 2019. There is a little more of Angelica in this blend, as it mixes grapes from different places in Mendoza that fermented with long macerations and some 30% full clusters and matured in 500-liter oak barrels. Despite everything, it has contained ripeness, a medium to full body with moderate alcohol and good freshness. 2021-2030" 95 points, The Wine Advocate