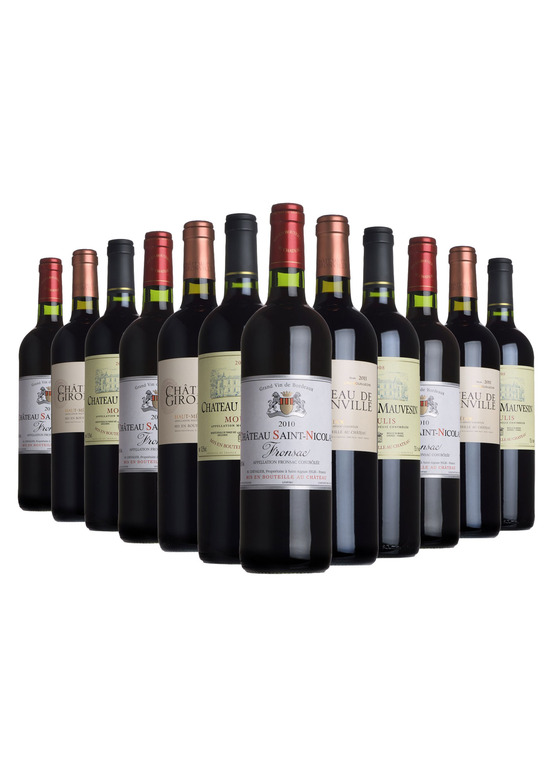 Fabulously mature clarets are like hen's teeth, so we are pleased to have acquired parcels of these three wines in recent months to make up this special mixed case. All three are drinking perfectly now and this is a great comparison of the vintages; 2008, 2010 and 2011.

The 2008 Château Mauvesin from Moulis-en-Médoc is a cabernet sauvignon-dominant blend that has aged beautifully. Fully mature, its full of sweet ripe fruit and is blessed with the softest of finishes. This estate produced such brilliant wine that the Barton family (of Léoville and Langoa fame) purchased the estate in 2011, on the back of this vintage being released.

Coming from Fronsac, the 2010 Château Saint-Nicolas is crammed with rich, ripe merlot, seasoned with just a touch of cabernet franc. With plenty of spicy red and dark cherries and a long juicy, slightly savoury or earthy finish, its hugely enjoyable.

The 2011 Château Gironville from the Haut-Médoc is an almost equal blend of cabernet sauvignon and merlot (plus a dribble of petit verdot) and beautifully textured. Theres plenty of succulent blackberry/blackcurrant fruit here backed by a long finish and velvety tannins.

This mixed case contains four bottles of each wine and is perfect to provide enjoyment in the evenings at home ahead of us. If you'd like some white to go with it, why not throw in our six-bottle case 'Delicious White Burgundy' for £96.70.